Anne Hathaway won me over when I saw her in the movie "The Devil Wears Prada". If you are into fashion, you definitely must have watched that movie. I loved the "transformation" period of her character from drab to fab! My favorite outfit of hers in that movie was this:
When I heard that Anne Hathaway was going to star as Catwoman for Christopher Nolan's Batman series, I had an inkling that she would look very different from the old stereotyped "Catwoman" image that was portrayed in the old Batman series arc. I mean, you would have figured that out just by looking at the Batman suits in Christopher Nolan's version and you would know what I mean! Then Anne's Catwoman costume was finally "released" and a lot of people were surprised and most of the people reacted negatively over it. Check out her costume here:
Personally, I think that it looks cool! Practially and realistically speaking, if you are a "burglar" as what Catwoman's main role is, you have to be in all black and cover yourself up to avoid having yourself identified right? For me, I like the new look. It jives with the "new" Batman suits. And it looks spectacular on Anne and her stunt double. Plus it just proves that a gal doesn't have to bare it to look sexy. 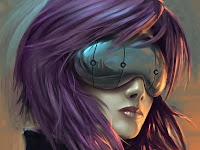 Personally, the goggles and the whole look actually reminded me of an anime that I watched before and was shown in a series on AXN/Animax - "Ghost in the Shell". Anime photos were taken from here and here.
So what do you think my dear coffeeholics? Does the new "catwoman" outfit brings "justice" to the iconic Catwoman image? Or does it look too.. boring and blah? Share your thoughts! Mwah!
Posted by Kaisensei at 6:17 AM