Its been a while since I was able to post here. I apologize and blame it on my jam packed erratic summer schedule! And yes, I feel wonderful to be able to say that. Its been ages since I actually went out somewhere worthwhile during the summer. For several years already, I stay cooped up in my house busy with summer work and basically lazing about. In fact there were times when I didn't even go swimming! But this 2010, I made up for all those years of being cooped up! 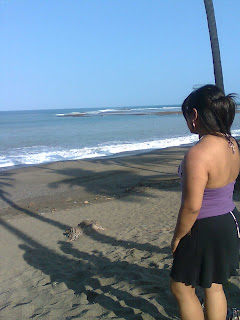 The very first major outing that I went to during the summer was at one of the beautiful beaches at Aurora Quezon. I forgot the exact name of the place but it was sooooo pretty that just watching the beautiful panoramic view soothed out all the aches and pains of the whole school year that just went by. LOL. It was indeed a refreshing experience!
Getting there was tough! We had to travel through unpaved rocky rough paths to arrive at this picture perfect beach paradise. I was pretty shocked to find that there were places like these on this part of the Philippines! I had always thought that the best beaches in our country were only those near Boracay or Palawan. I was with some friends and family when we went there and we all felt that this beach was the Perfect Find! There were also a lot of nearby corral where you could actually walk and wade towards it and explore... and some of the fish and sea urchins and star fish found there were quite unusual!
Me, I ended up lying and relaxing on the sand under the cool shade of the palm trees by the seashore. No I didnt really swim. Just being able to relax and listen to the wonderful soothing sound of the ocean on the beach was heaven to me! Definitely this is a relaxing place that I would like to go back to next summer. :)
Posted by Kaisensei at 12:37 AM No comments: