The 2013 Giving Journal by Coffee Bean and Tea Leaf is Here!

HEY COFFEEHOLICS! Guess what? Giving Back is Easy with The Coffee Bean & Tea Leaf's 2013 Giving Journal.  Now that CBTL is having its 10th year anniversary here in the Philippines (its 50th abroad!), CBTL will be spreading the cheer early by handing out the stamp cards as early as this October 31, 2012! Yay for us coffeeholic addicts and collectors!


A brand built on compassion, The Coffee Bean and Tea Leaf has long supported charities, foundations, schools, and other organizations in need. The CBTL continues its support for the Real LIFE Foundation by dedicating proceeds from the Giving Journal to the organization.

AND get this, CBTL's President, Walden Chu, shares to us that this year, they've decided to make it easier for people to share the gift of giving by lowering the number of stamps to just TWELVE (12)!!!! CBTL wants us all to be inspired to share in our passion for genuine kindness all throughout the year.


To get that stamp, you just need a minimum single-receipt purchase of any Original Ice Blended, Coffee-based, or Tea-based Beverage, or Frozen Swirl and it qualifies you to get a stamp card and a stamp on a corresponding box or circle rather on that card. The drink assignments per "circle" is simple! All you need to do is get 1 Original Ice Blended, 1 Espresso Drink, 1 Tea Latte, 1 Red Velvet Hot Cocoa or Red Velvet Ice Blended, and 8 of any of the aforementioned drinks. Fill up all 12 and submit the card to the nearest CBTL store and you get the journal. Easy Breezy right?


The CBTL Journal has become more than just something to write our thoughts on. The Giving Journal has pages upon pages of great features centered on giving back. The 2013 Giving Journal has sheets that show moments where the brand has helped many of its loyal customers carve out their own way of kindness in the hearts of many, making it the perfect avenue for people to embark on a journey of giving.

Oh and another notable feature for CBTL's Giving Journal is the monthly coupons which I find one of the awesome things that makes us keep coming back for more of CBTL. They not only inspire generosity but also give generously even to us their customers! Love it!

Oh and yes my dear coffeeholics, I am absolutely thrilled to be part of the first group of people to get their hands on the journal! Teeeheee.. kinilig ako! haha. I've been an avid fan of CBTL for AGES! Ever since they first started to give out notebooks years ago (anyone who has that give me a holler! :P), I've been collecting their stuff ever since. I've got the red notebook.. and the black and white one! And yeah I definitely got my hands on the very first giving journal by CBTL. I really love their concept and how they really focused on the giving part and even encouraged their loyal customers to be givers as well. That's why I didn't mind spending lots (ahaha.. oy totoo diba.. pinagiipunan pa yung pang gastos nyan!) to get me some stamps to be able to claim my journal. Coz I know the money I spend means also money to be given to others! Scholars pa at that. 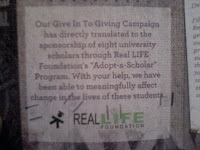 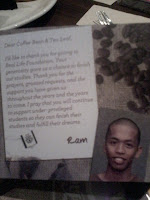 The wonderful team who were with us at the CBTL branch of Robinson's Magnolia were kind enough to explain that at each stamp card was a thank you letter from some of the scholars who were a recipient of the Giving Journal proceeds last year. It definitely stirs up one's heart to know that even through this we can help.

While there, we were also treated with Coffee Bean and Tea Leaf's the Holiday drinks and sweets for this Christmas! So those RED VELVET fans of last year, well don't fret coz its back again for this Holidays! Red Velvet Hot Cocoa and Red Velvet Ice Blended is back for all of us to enjoy this Christmas season.

All of you sweet tooths out there, its time to also have a taste of CBTL's divine sweet treats! This Christmas CBTL will be having three new desserts to tantalize us -- Chocolate Caramel Fudge, Raspberry Chocolate Cake, and Rum Cake. YUM YUM YUM!

My personal favorite is the RUM Cake! I absolutely love it. Its not that sweet and it definitely makes you want some more. The first two cakes only cost P135 while the Rum Cake is P115. Well, if I gain weight this Christmas now you know the culprits! LOL!

So what are you waiting for Coffeeholics? Seriously, head to the nearest Coffee Bean and Tea Leaf shop NOW and spread the gift of giving! Happy Holidays coffeeholics!

Posted by Kaisensei at 2:38 AM No comments:

Hey Coffeeholics!!! I'm back!!!!! Yeah I know I still can't believe myself that I actually was able to NOT go online for more than a month. It was a conscious decision on my part. I had to do it for my sanity (lolz..), health, and rest. The major reason why I haven't been online these past few months is due to my work. I've been extending hours in school to train and coach several of our students for a week long competition where they will compete with other schools with the same curriculum as ours in the areas of academics, athletics, speech and drama, arts and exhibts (including photography and needlework), and music (vocal & instrumental). I coach/train students in the academics and needlework category. Plus I accompanied them during the competitions itself (which was last week). The training and coaching was tiring which explains my online disappearance. Most of the time, I go home wiped out and have no strength (seriously!) to open my laptop much less type. I really wanted to blog but I needed the rest. I know I missed a lot of events and good blogging opportunities (sighs.. >__<) But then.. the results in the end truly paid off! Here are some photos of some of the stuff my "kids" did which I'm so proud of.. proud that they were able to accomplish it and not only that.. bag medals because of it!


I can't help but be amazed by all the students' gifts and talents and hard work. They all did an amazing job and I'm so proud of them. Not all of them won but the experience and the lessons that they all learned through all of this will hopefully spurn them on to further develop their skills and talents and encourage them to give their best. I'm grateful to God that it all paid off! We went home with the overall award in academics and third overall in arts and exhibts and in music. Truly God has been good to my school and to the kids. So yeah, all the abstinence on the net and focus on them was all worth it. :) Seeing their happy faces especially when they got their medals was worth it.

So yeah, this basically sums up what I've been doing when I wasn't online. Hehe. Thank goodness for food supplements, vitamins, and a whole truckload of coffee to keep me up and running. I'm finally able to get that  much needed rest and catch up on my backlogs (ack. >_< super sorry about that!) this sembreak. Yay sembreak! Hahaha.. yes, the perks of being a teacher is awesome. So I'm glad to be back and yes.. Brew of  The Day is back in service. :)

Posted by Kaisensei at 2:39 PM No comments: