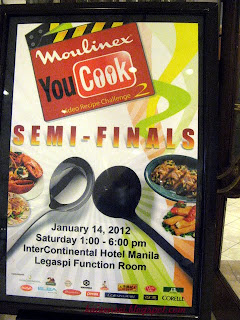 Hey Coffeeholics! I don't know about you but one of the things I love to watch on TV are the cook off type of shows where professionals or aspiring chefs go all out and cook and compete against each other to get to that most coveted NUMBER ONE spot! Well last Saturday, January 14, at the Hotel Intercontinental in Makati, I was able to attend my very first live cook-off courtesy of the Moulinex You Cook Video Recipe Challenge 2.

Moulinex You Cook is a culinary competition where entries are submitted in video clips showing the ingredients and procedure through a cooking demo using Moulinex food preparation products. Currently enrolled Culinary Arts and Hotel and Restaurant Management students in Metro Manila aged 18 years old and above are the participants for this competition. Wonderful prizes await for the contestant, the mentor, and the school of the winner!

So I was invited to be a witness of this event and of course I jumped at the chance of being able to watch young and aspiring Celebrity Chefs or Restaurant Owners strut their stuff LIVE for everyone to see. Since it was the Semi-Finals already, only sixteen out of the numerous entries were chosen to battle it out for all of us there.

In this round, the contestants was given 1 1/2 hours to cook their submitted recipe and will be judged according to the following criteria:

Of course with this kind of event, Moulinex invited Chef Bruce Lim, Chef Nino Laus, Rory Subida, Nina Daza-Puyat, and Laurent Casteret as the esteemed panel of judges. With their knowledge, skill, and expertise in this area, it was enough to even fluster some of the contestants!


So the Hotel Intercon function room was arranged in such a way to accommodate a set of 8 contestants at a time to prep, cook, bake, and do whatever they need to do to be able to "re-make" the dish that they submitted for the Moulinex You Cook Video Challenge 2. The theme chosen for this year is an original recipe of a Filipino International Fusion Cuisine. I must say that some if not most of the contestants really had interesting fusion dishes. A number of the "recipes" that got in the semi-finals had Malunggay in it! It was really cool how they were able to come up with this dishes! If you would like to see what our semi-finalists came up with for this contest, kindly drop by the Moulinex You Cook website and check out their video tutorials! AND not only that, why not vote for your favorite video as well? There is still an ongoing contest on which video recipe gets the "People's Choice Award".


Anyway, the contestants were given 1 1/2 hours to finish their dish. And during the whole time, from preparing the equipment and ingredients that they were going to use up to the time that they were plating, each contestant was observed closely by each judge! The judges were free to talk and question them while they were cooking. It must have been really terrifying for some of them coz they not only had to concentrate on their dishes but had to explain and answer the judges' questions and inquiries. Not only that, but they really had to budget their time wisely!

Of course Ms. Yovilyn kept us (the audience) on track by keeping the contestants on their toes as she asked the contestants questions so to explain to us about the dish that they were making. Part of the criteria of judging for the semi-finalists was that they should have a pleasing personality. Definitely several contestants stood out as they handled the questions like a pro as they gamely interacted with us while cooking. Hmmm smells like potential celebrity chefs in the making!

Once done with the plating, each contestant can now present to the panel of judges their creations. Unfortunately due to the time limit, some were not able to finish their dish on time and had to present to the judges their unfinished or uncooked food. Sayang!


To be continued...
Check out PART 2 of this Food Diary - Moulinex You Cook Video Challenge 2