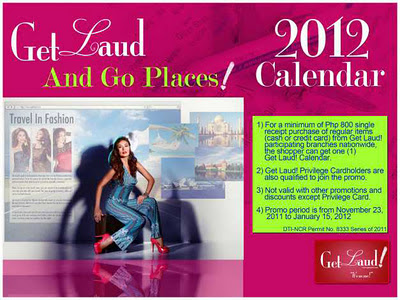 Hey Coffeeholics! As Christmas approaches, I suggest you get ready with your Christmas gift shopping as soon as you can. I can't even emphasize how much important it is to grab the opportunity with all these sales ongoing! You not only save money but you get a chance to grab the best deals being offered out there. So coffeeholics and shopaholics, check out GET LAUD's special treat to all their loyal customers. With this special treat, you not only get to enjoy shopping during sale season only but every month of 2012 coz Get Laud will be giving away this chic Get Laud 2012 tabletop calendars for FREE! And I'm not excited just because of the calendar but because of what's inside - a special treat of GET LAUD coupons every month of 2012. Hmm this intrigues me. I wonder what Get Laud has in store for us?

Well my dears, if you really wanna know, all you have to do to claim your free Get Laud 2012 Calendar is to shop at any participating Get Laud branches nationwide (check out store locations here). Then purchase regular Get Laud items for a minimum of Php 800 on a single receipt. For purchases, cash or credit card may be accepted. Get Laud Privilege Cardholders are more than obliged to join. This promo is not valid with any other promotions and discounts except the Get Laud Privilege Card.

So don't forget to drop by at the nearest Get Laud branch nearest to you and avail of the GET LAUD 2012 Calendar on or before January 15, 2012 to enjoy a whole new year of special treats!  Also do kindly check out their website, add their facebook, or follow their twitter for the latest promos, sales, and updates.


Get Laud Website | Get Laud Facebook | Get Laud PLUS | Get Laud Twitter
--------------------------
GET LAUD, the quality ladies' apparel, makes use of the finest imported and trendy fabrics throughout all their creations. Stylishly cut and locally sewn, GET LAUD clothing not only gives superb comfort but makes its customers instant fashionistas as well. GET LAUD also won the "Marketing Excellence" Award for 2010 and the "Most Promising Retailer" Award for 2007 from the Ayala Malls. Consecutively, in 2005 and in 2006, GET LAUD received the "Seal of Excellence" Award as the "Best Spandex Apparel Retail Store" given by the National Shopper's Association of the Philippines and the National Shopper's Choice Awards.
Posted by Kaisensei at 5:45 AM

Email ThisBlogThis!Share to TwitterShare to FacebookShare to Pinterest
Labels: Brand - Get Laud, fashion, Get This, Press Release