Laced Up Tour 2012 by Adidas with Breathe and Stop 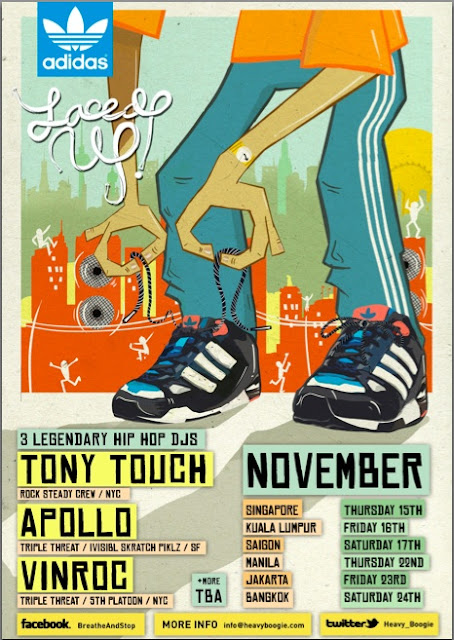 Heavy Boogie & adidas Originals are at it again!

This dynamic event series continues on in the tradition of the groundbreaking Breathe & Stop events by integrating dance, music & the audience in a celebration of originality & passion.

Armed & ready with a diverse selection of quality Hip Hop, Soul, Funk, House, Reggae, & everything in between, these are three of the most skilled, well-rounded purveyors of quality music on the planet who have come together for the adidas Originals “Laced Up” Tour.

They are set to amaze audiences with blistering World Champion level technical skills & unparalleled musicality in their first tour of Asia together.

The tour will also feature the Breathe & Stop Champion dance crew from each region in an exclusive showcase performance.

For the first time, the Breathe & Stop Cypher One battle will see 15 of the best dancers in each city battle it out till one winner reigns supreme demonstrating their flavor, musicality, style, stamina & skillfulness over at least 3 different genres of music.

Along with the Heavy Boogie crew, top local talent from around the region as well as breathtaking live visuals from Scratch Media, this will be a nonstop party rocking extravaganza not to be missed.
The Manila party will be held in Time Club, Makati Avenue, Makati City.

For more details & updates, visit facebook.com/BreatheAndStop
Limited tickets! Reserve yours today via tickets@heavyboogie.com
Posted by Kaisensei at 8:30 AM